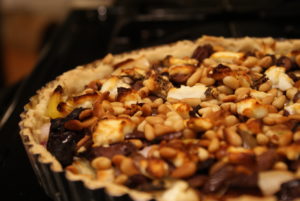 I seriously lack a sweet tooth.  If there was such a thing as a “salt tooth,” then I would have many of those. Olives are one of my favorite salty treats. People grab cookies for a snack. I grab a handful of olives.  Olives, or zaytoon or zaytun, are considered the “Sultan of the Table” in the Middle East.  They appear at breakfast, lunch, and dinner on the table, as no meal is complete without the infamous olive platter.  During Ramadan, I even went out and bought an ugly glass divided dish to keep all of the olives in.  It reminded me of my childhood in Egypt, where the same olive dish would go in and out of the fridge for every meal.

I recently read in my new favorite book, The Middle Eastern Kitchen, olive trees were “first cultivated in Syria or Palestine, long before 3000 B.C., and gradually spread westwards to Crete and Greece and upwards and eastwards into Anatolia and parts of Central Asia.” Olives also have a special place in many religions.  In Islam, there are a number of hadith that mention the Prophet Muhammad using olive oil on his skin, and that he said: “Eat olive oil and apply it (locally), since there is cure for 70 diseases in it, one of them is leprosy.” (Hazrath Abu Hurairah).  Additionally, the olive is mentioned several times in the Quran, with the expression “mubarakatin zaytoonatin” used to describe the olive as being “plentiful, sacred, auspicious, providing countless blessings.” In Christianity, olive oil is sometimes used during baptism or the Christmas mass.

Although olives originated in the Middle East, in America, fresh olive bars only tend to carry French, Greek, and Spanish olives.  One of the best parts about living in the UAE is that I get to choose between Jordanian, Syrian, and Moroccan olives at my grocery store.  Very different from the olive bar at Whole Foods and Wegmans, and all the more delicious. Not to mention, the health benefits of olives are plentiful, as their high monosaturated fat content has been associated with reduced risk of cardiovascular disease.

Across the Middle East, olives are not only sitting on the table to snack on, but are oftentimes incorporated into the main dish itself.  One example, is the use of olives in Moroccan tagines, such as midEATS’ recipe for Chicken with Preserved Lemons and Olives. I also came across an Egyptian recipe for spicy pigeon with olives.  To add to the olive repertoire, I thought I would share my Caramelized Onion and Olive Tart recipe, which combines the salty flavor of olives with the sweetness of slowly cooked onions.

As I mentioned before, I have a been on a slight obsession with making tarts. I first made this one when we had friends coming by to watch Lost a few years ago.  Since then, I have made this many times, and it is not unusual for the tart to be devoured before it even hits the dining room table.  In addition to caramelized onions and olives,  I also added a cheese I discovered, Fleur Verte. I cannot tell you how much like heaven this cheese tastes like – YUM!  It is a herb coated cheese from France.  I presume you can find it at any place with a specialty cheese counter.  If you cannot find it, a good goat cheese or herb chevre cheese will work just fine. 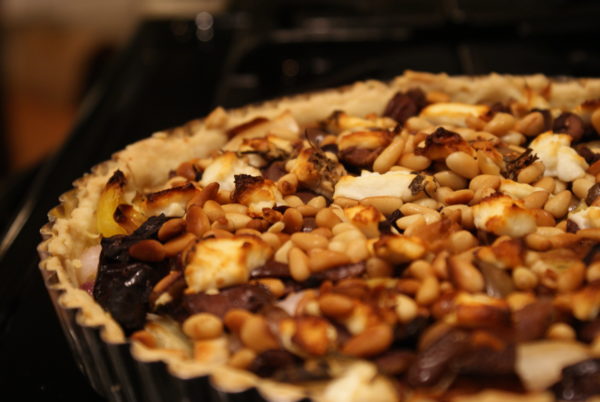