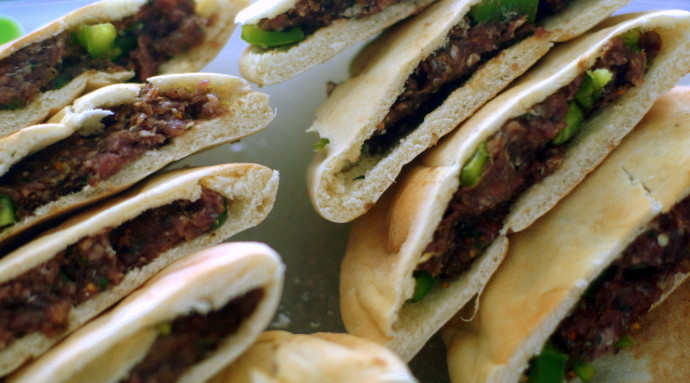 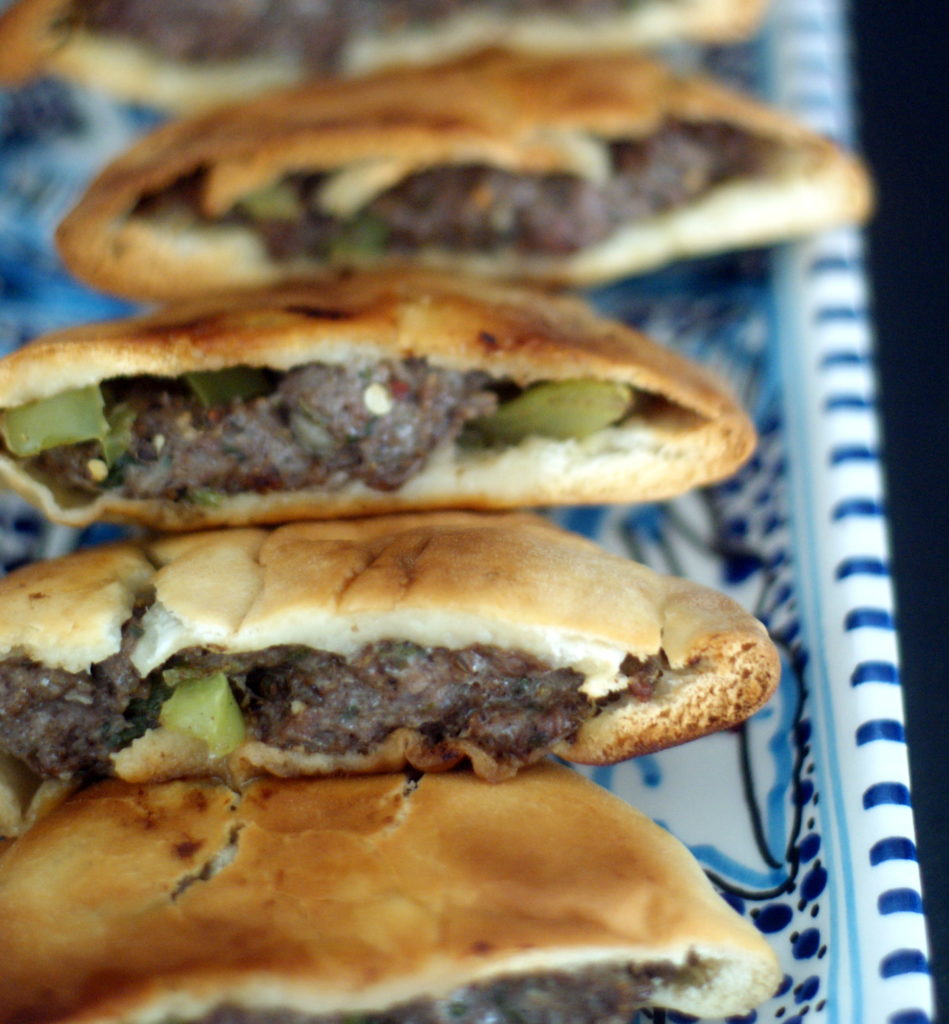 “Hawawshi? What the heck is that?” a friend once asked.  Now, I don’t blame her.  The name sounds like some kind of dance move, or the name of a strange character from television.  As one article put it: “[Hawashi] is a cross between a hamburger, a Mexican gordita and a South American empanada.”  In Egypt, they are made with baladi bread, which are small pita pockets.  You put the raw meat in the pita pocket, cover with aluminum foil, and bake for 30 minutes. Simple enough, right?

It is essentially quite similar to a kafta sandwich.  But it is WAY better. Why, you ask? Well, the flavor of the kafta gets baked into the dough of the bread.  The outside of the sandwich when brushed with butter gets delectably crispy.  This is just not the same as the kafta sandwiches we grew up eating on the beach in Egypt.  Those always seemed like an overcooked piece of beef shoved into a hotdog bun of sorts; hence, why I say hawawshi is way better.

I came across a forum discussing that with the bread crisis in Egypt, more restaurants and home cooks are making their own dough and baking hawawshi.  I have tried both fresh dough and using pita bread.  Both were delicious in their own way.  Nowadays, in an extreme bout of laziness, I have taken to purchasing fresh pita bread from the grocery store.  A package of 6 loaves of freshly baked pita in the UAE runs you maximum $1.5 AED, which is the equivalent of about 50 U.S. cents.  Sometimes, in the name of time, you have to sacrifice homemade food for store-bought versions.   Although I am about 90% gluten free, pita bread is one exception because my attempts at making a GF pita have turned out quite awful – more like a crusty saucer that would crack your tooth if you bit too hard. Sigh.

Anyway, back to hawashi. For those of you who have travelled to Turkey or eaten Lebanese food, you may have come across lahmajun/lahmacun or sfiha.  Both of these are traditional flatbreads topped with minced meat and then baked in an oven.  All are amazing, but nothing compares to the Egyptian “hot pocket” version. I think hawawshi comes out as the best, but the Egyptian in me may be a bit biased 🙂

A few different takes on this recipe include adding habenero peppers, using chili flakes, or using pre-purchased raw kafta. If you buy the premade kafta from your local butcher and then stuff it into pita, then you TRULY have a meal that can be prepared in less than 10 minutes (assuming you dont add green peppers or anything else to the mix).  Also, I really, really love the Simply Organic Spicy Steak seasoning, and I tend to bring three or four bottles back with me after every visit to the states.  I always use it in my hawawshi for an added kick, but feel free to omit.  Last important tip: make sure you brush each with butter or spray with olive oil before baking and wrap in parchment paper. This will prevent it from sticking and keep ’em crispy! 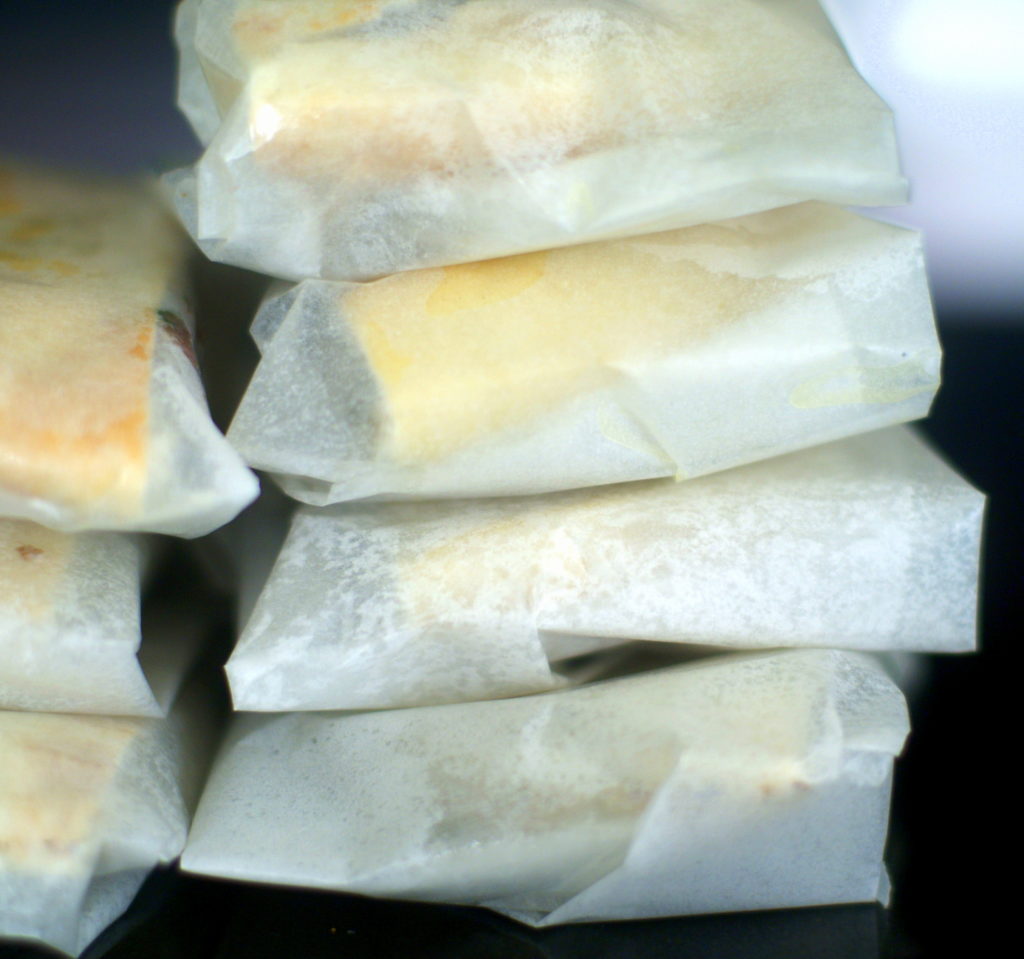 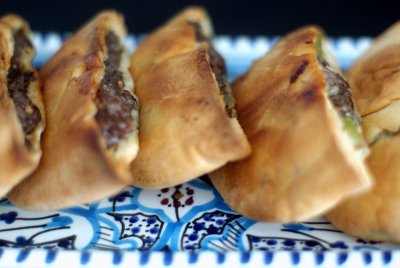