I have very fond memories growing up in Ann Arbor, Michigan, and attending huge palestinian wedding celebrations.  There was always a dish there, made in a pot so big, my entire family could sit in it. It was Maqlooba, which literally means “flipped over” in Arabic.  There would be juicy bits of lamb (which I always picked out), tasty cauliflower, and deliciously fried eggplants.  I vividly remember the women would flip the massive pot over and everything seemed to come out seamlessly.  The dish shined with a beautiful golden crispy hue from the toasted bits of rice and veggies that reached the bottom of the pot but were now featured on the top.

I realized that maqlooba has a long history, and in a 13th Century Baghdad cookbook, there is an entire chapter called “fried, marinated, and turned.” This is exactly the key to making a good maqlooba – fry the veggies, marinate the meat, then turn it all over when finished.  However, this 13th-century recipe leaves out about 100 steps that are involved in making a traditional maqlooba. Generally speaking, I have made and tried both Iraqi and Palestinian versions of this.  The Palestinian one tastes more creamy, as a yogurt sauce is served with it.  However, I always find the Iraqi one to be much heavier, as there is not only a lot of fried cauliflower and eggplant, but also potatoes in there too.  Both are extremely delicious, especially during Ramadan or some other home feast where you have a couch nearby for your sure-to-be comatose state afterwards.

Over the course of my kitchen experiments with maqlooba, I never seemed to perfect that perfect flip of the pot where the eggplant was perched atop a mound of rice. It always seemed that the meat got stuck to the bottom, the tomatoes turned to mush with the skin separating and leaving little tomato skins dotting the rice, or that the entire flipped pot would sink into more of a flat casserole type of dish.  However, I am proud to say, that not only have I perfected the flip, but I make a healthier version of maqlooba that my kids enjoy.  Nothing gives me greater satisfaction than seeing my children eat (semi-) traditional Middle Eastern meals! 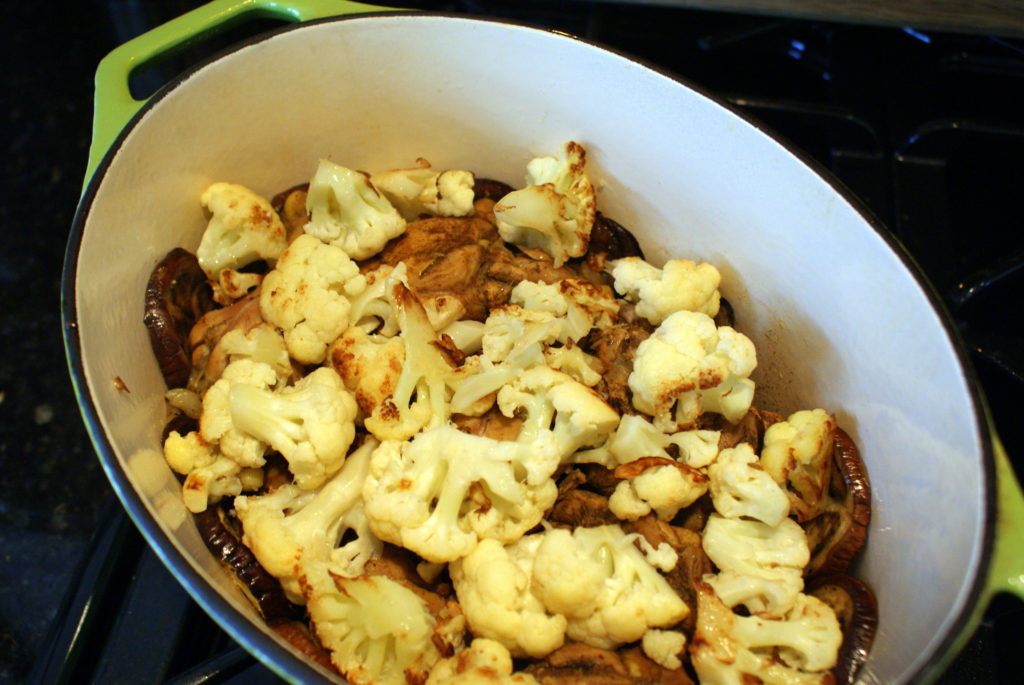 In trying to keep things healthy, I made a few substitutions that I hope wouldn’t offend maqlooba lovers of the world.  I use chicken breast to keep it lean, I roast the eggplant, and I don’t add tomatoes.  I actually don’t even know if the tomatoes are traditional, now that I think about it.  Anyway, this recipe now takes me an hour, start to finish.  This recipe used to take me nearly 2 hours, when I used to use bone-in chicken, the pressure cooker, frying eggplant, and lord knows what else took me so long. This recipe is not only easier and healthier, but just as tasty! 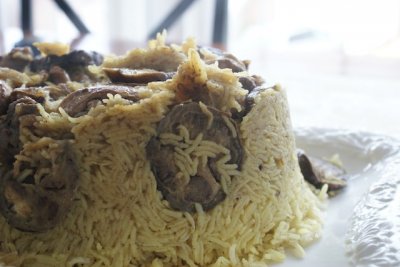