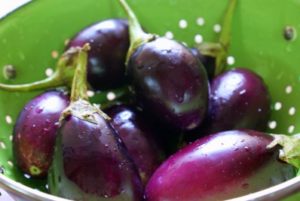 When I think of my favorite Egyptian foods, I think of 2 things – moussaka and béchamel. Putting them both together makes my heart sing. I know, I sound lame, but seriously, I get excited when I combine my favorite flavors and they work together. Most of you may know moussaka as a traditional Greek dish, although its origins are Middle Eastern.  A 13th century cookbook from Baghdad makes reference to a dish that sounds familiar to the modern day version, just without béchamel. The word itself is an Arabic word – musaq’aa, means chilled and my mother always used to serve her moussaka cold.  Also, my mom never puts béchamel sauce on top, but my sister’s Iraqi mother-in-law always does.  So many variations, but all so goooood.

Most recipes of moussaka use lamb – ACK! I am not a fan of lamb, and in fact, I pretty much avoid it like the plague. Shockingly, here in the UAE, hoards of people stand in line at the butcher to buy their coveted lamb.  Thankfully, this just leaves more BEEF for me 🙂  Travelling around the Middle East also proves to me just how much people prefer lamb over beef.  I think it is because there are no green pastures out here for the cows to roam free and fatten up.

I made this for a recent Ramadan iftaar and I had successfully converted 2 eggplant-haters into moussaka-lovers! This version of moussaka not only adds béchamel sauce, but also potatoes.  My sister always sneaks them in, and I think it adds a nice contrast to the roasted eggplants.  Further, I had read a Bobby Flay recipe for béchamel where he added lemon zest.  It is an awesome addition, and I definitely will never make béchamel again without it!  If you time this recipe right, you can make it fairly quickly, although the first time, I fumbled around the kitchen quite a bit.  But once I got the hang of things and got more efficient, i.e.roasting eggplants while making sauce, it went by really quickly the second time around.  The best part about serving a moussaka is cutting into it and hearing the “ooh’s and aah’s” as you cut into it, which is why I never got a picture of the final dish plated up! 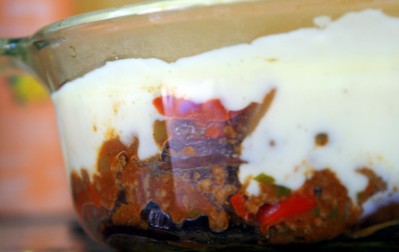