I invited someone over for the first time last week. I told her I was making musakhan. I then remembered she was Palestinian. Then I got really nervous –I am making a Palestinian dish for a Palestinian. “This better be good,” I told myself. You see, musakhan is a very traditional Palestinian dish that consists of chicken, sautéed onions, and sumac. The mixture is tightly wrapped in large saj or markook bread and further baked in the oven. The chicken is cooked in the bread, and the bread soaks up the flavors of the chicken and slowly sautéed onions. You tear into it with your hands, without a care in the world. 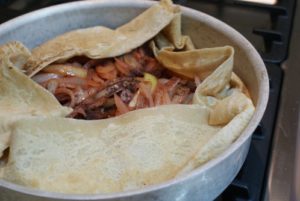 Recipes are passed down generations, and here I was on a Wednesday afternoon making up my own version. No pressure, right? My sister makes a version with musakhan chicken, but she shreds the chicken and wraps them in lavash bread and bakes them. I don’t know where she got the idea, but the sandwiches are awesome. I have made both versions, but I only had chicken breast on hand and traditional musakhan calls for bone-in chicken. So, it was going to be a sandwich day.

So, there are a few special ingredients in musakhan. The first, and arguable most important is sumac. This delectably tart, bright red spice is found throughout the Middle East and is used in many dishes – fattoush, Iranian rice, and even Turkish kabobs. It is made from the dried flower of the sumac plant, which is then ground into a fine powder. Sumac brings a tangy lemony flavor to foods that simply cannot be replicated. I bought some sumac from a Palestinian farmer that was at an exhibition here in Abu Dhabi. It is the best tasting sumac have ever had. I hope I find him again….sigh. I digress. The other special ingredient is the bread. In the U.S., Costco sells awesome lavash bread that is perfect for these sandwiches (they are the ones in the pictures below). In Abu Dhabi, I use either the traditional saj bread, which is extremely thin, or sometimes I can find Iranian bread at Carrefour which works well too.  (A side note – these are awesome to eat for suhoor…)

I dug up my old recipe for the sandwiches, and was so happy that I didn’t have to make any changes to the recipe. The sandwiches came out perfectly. How do I know? My guest went for seconds, and took some home with her for the next day. Whew! 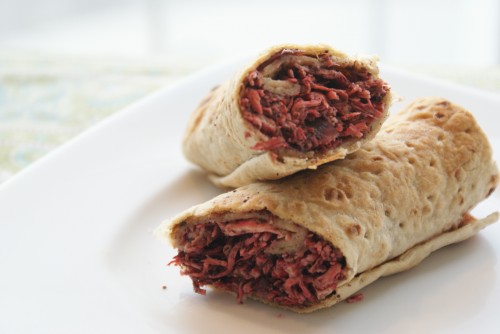