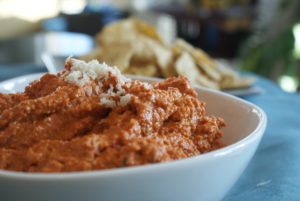 Maybe it’s just me, but I sometimes I get sick of hummus.  When I get sick of hummus, I eat baba ghanough.  What happens though when you get sick of that too? What else possibly is there to dip your pita bread and raw veggies into? I’ll tell you – Muhammara! This is a super easy, low cost dip that has both great flavors and texture: perfectly tangy, sweet, spicy, and crunchy.   It combines toasted walnuts, panko crumbs with roasted red peppers and a fresh poblano pepper, which is then topped off with a pinch of cumin, and a dash of pomegranate molasses.  If that doesn’t sound amazing to you, well, you’ll just have to try it.

The origins of muhammara are Syrian, but I saw it in Istanbul, and it is often served in Lebanese restaurants. Traditionally, muhammara is made from sun-dried red peppers that are blended into a paste.  Another way to make this is by taking fresh red peppers, cleaning them, tossing them with olive oil, and placing them under the broiler until they are charred (don’t forget to remove the skins though!)  So aside from these ways to make muhammara, I usually opt for the super simple cheaters way to make it.  Yes, they make roasted red peppers in a jar, saving a whole 30 minutes of time, but more importantly, you can save a jar until you are ready to whip this up.  Trader Joes, along with most grocery stores around the world, sells a great affordably priced jar, and some stores, like Wegmans, carry them at the fresh olive bar.   I also toast the walnuts because I think they taste better that way.  But if you are in a pinch, raw ones will do.  I threw in a poblano pepper because sometimes I feel like channeling my favorite American chef, Bobby Flay.  I never see anyone use poblano’s except for him, so I feel cool just buying them.  Also, whatever you don’t dip your chips into you can save for sandwiches – this makes a great spread that only tastes better the next day.

Grab a jar of roasted red peppers the next time you are out and save it for when you are in a pickle.  The last time I made this was when we were invited to a season finale party and I didn’t have time to go to the store.  Thankfully, I had all of these ingredients handy.  To top that off, I felt cool just saying, “Oh, I just brought muhammara….You’ve never had it…Oh, it’s just roasted red peppers with walnuts, poblano peppers and pomegranate molasses – nothing fancy.” You then get all sorts of “oooohs” and “aaaahs” when you put it like that.  Nobody will ever guess that it took less than 15 minutes to make! 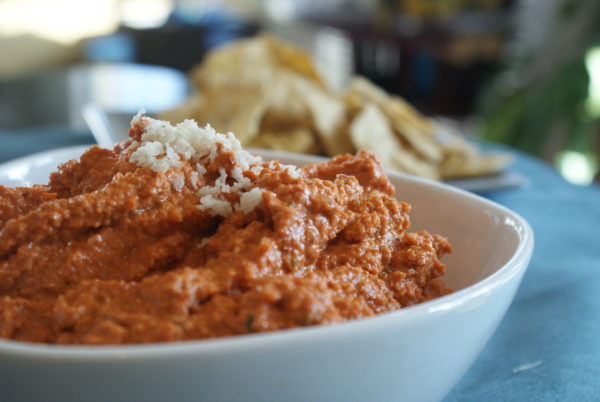 Leave a Reply to Shumaila Cancel