To honor the people of Tunisia, and their recent victorious revolution, we wanted to make something Tunisian.  The only traditional Tunisian food I have ever eaten before was shakshouka or chakchuka.  This is a traditional Tunisian dish that is commonly eaten across North Africa.  Not only has the dishes roots gotten lost in translation (in Egypt, we have a version called agga), but in English this got translated as “eggs in purgatory.”  Why, you ask? It is likely because the eggs are swimming in sinfully delicious peppery tomato sauce.  Okay, so I really have no idea.

I decided to hit the books to find how it is traditionally made.  Claudia Rodan has a fairly simple recipe in her book: The New Book of Modern Middle Eastern Food.  Some have even taken it to another level, like Joumana of Taste of Beirut, where she literally stuffs an entire potato with eggs and peppers.  The common elements across all of the recipes appear to be keeping the eggs whole (so they look fried), tomatoes, and bell peppers.  The rest is up to your imagination (my favorite part!).  I decided to tread the traditional line, and only make a few changes here and there.  The result: delicious eggs, bordering on sinful…. 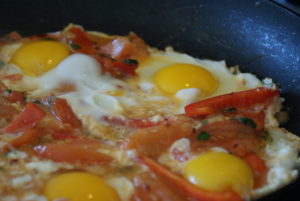 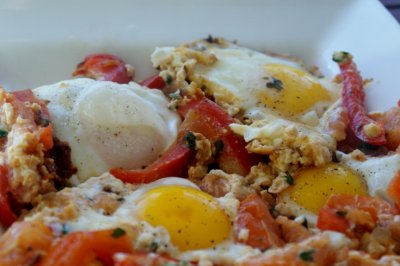