The other day while delving into my mom’s old battered copy of the 70’s cookbook from which I derive most of the recipes I’m posting, I found an intriguing dish that I had never, ever heard of, and for which even Google yields no search results: zingol bi summaq, or burghul balls with sumac. It is a fasting dish, one of many that are favored during Lent, although they by no means disappear from the table the rest of the year. Obviously, I spectacularly missed my chance of posting this Lent dish during Lent, but as for myself, I have been indulging in it without any regard for the calendar.

The ingredient list on its own identifies it as an austere (and low-budget) dish, consisting simply of parboiled cracked wheat in a sumac broth with chopped onions. Parboiled cracked wheat, or burghul,alternatively spelled borghol and sometimes known by its Turkish name bulgur in the West, used to be considered the Lebanese side dish. It was the main staple food, found in the pantry year-round, present at every meal, and indispensable to the nutrition of a population that overall could not often afford meat and only had it in small quantities. Burghul was called “the nails that hold the legs together.” Its relative demise began in the 19th century when a novelty dish, white rice, became a hit with the wealthy families of the big cities. On the eve of WWI, just a century ago, rice had firmly displaced burghul. Any Lebanese dish that involves rice today, was once made with burghul in its stead. This tidbit of culinary history is immortalized in a proverb: al 3izz lal-rizz, wel-burghul shanaq halo! “All the honors are for the rice, and the burghul can only hang itself!” Yet the two national Lebanese dishes, tabbouleh and kibbeh, are still and forever burghul-based.

Burghul is actually pre-cooked, as it is made by boiling wheat, then drying it, and finally grinding it. Finer than semolina but rougher than flour, it comes in three grades: rough, fine or very fine. While each has its specific uses, I tend to use whichever I have on hand. For this recipe, the rough grade works quite well, but I leave it to your personal preference.

The second most important ingredient in this recipe is the spice summâq or sumac, for which there is no substitute. Happily it has gained much ground outside Lebanon of late, and Middle Eastern markets are sure to have it – in the UK at least, all mainstream supermarkets now sell it. Sumac is a tart spice, made of the dried and ground skin of berries that grow in velvety clusters in the Lebanese mountains. It is used in cooking or sprinkled over food; back in the days when lemon was not available year-round, sumac was used to make a tart liquid that could be used instead of lemon juice. Being very fond of sumac (I munch it right off the tree when I can find it, sending my tastebuds into a coma for a week), I always double the amount specified in the recipe…

Finally, the flour that is added serves to make the balls hold together. It is plain flour by default, but one could experiment with other types. 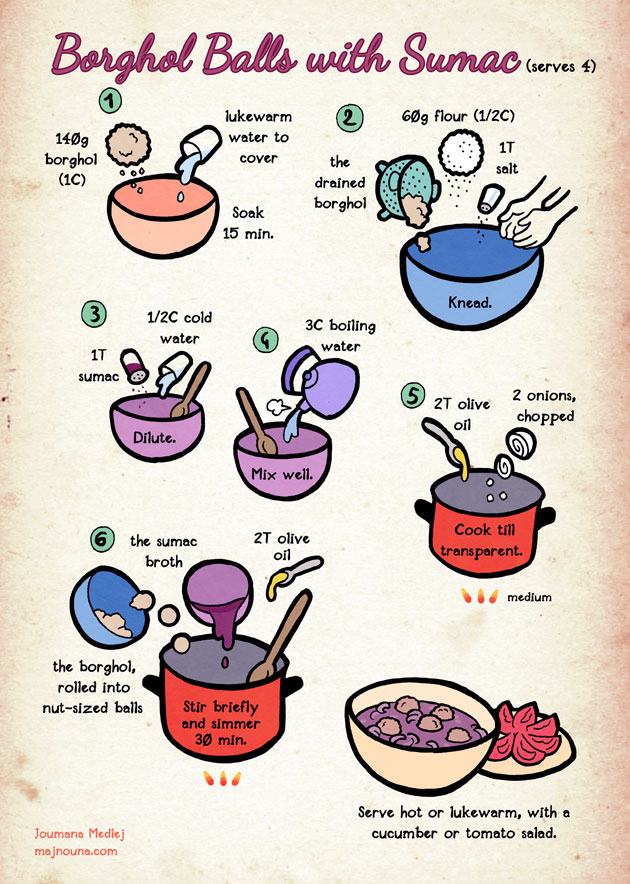 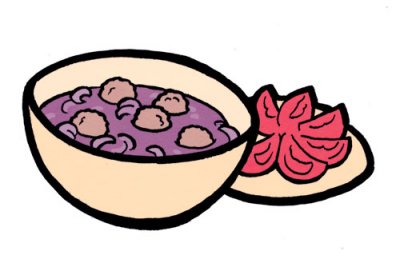